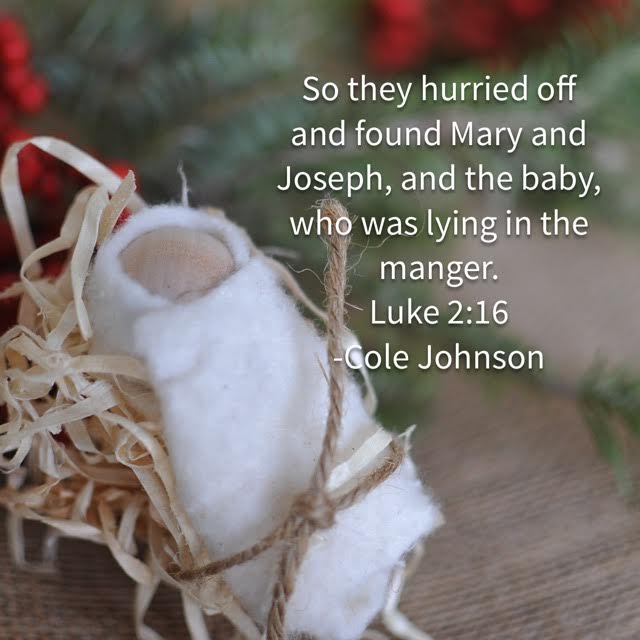 God moments tend to show up when we least expect them.

I called a lady to schedule an appraisal the other day. She wanted me to be sure to let the appraiser know, so it wouldn’t alarm him, that her husband would be in the living room in a hospital bed. He had recently had some major medical issues and was now paralyzed from the waist down. She went on to tell me that her son had had a traumatic brain injury earlier this year. She said he was doing well, much better than the doctors had predicted.

She said she had so much to be thankful for this Christmas.

She said she had been worried about not having many Christmas presents for her grandchildren this year. She was trying to explain to them that they wouldn’t get as many presents because of the circumstances. One of her granddaughters looked up at her and said, “Grandma, don’t worry about it. Presents are not what Christmas is all about. Christmas is about Jesus. We just need to run to the manger.”

We need to run to the manger.

What a message! A message I so desperately needed to hear. From a child to a grandmother. And then a grandmother to me. A grandmother who is able to see beauty in her brokenness. Who is thankful for what she has been given. She gets it.

She’s running to the manger this Christmas.

If we aren’t careful we will run everywhere BUT the manger.

It’s easy to get caught up with all the hustle and bustle, presents, activities, food (one of my personal favorites), friends, and family. And all of those things can be good and fun.

But are we running to the manger?

Suddenly a great company of the heavenly host appeared with the angel, praising God and saying, “Glory to God in the highest heaven, and on earth peace to those on whom his favor rests.” When the angels had left them and gone into heaven, the shepherds said to one another, “Let’s go to Bethlehem and see this thing that has happened, which the Lord has told us about.” So they hurried off and found Mary and Joseph, and the baby, who was lying in the manger. Luke 2:13-16

The wise men did.

After the Wise Men had listened to the king, they went on their way. The star they had seen when it rose went ahead of them. It finally stopped over the place where the child was. When they saw the star, they were filled with joy. The Wise Men went to the house. There they saw the child with his mother Mary. They bowed down and worshiped him. Then they opened their treasures. They gave him gold, frankincense and myrrh. Matthew 2:9-11

And we should too.

Let’s run to the manger this Christmas. Fall before Him. Worship Him. Praise Him. Thank Him. Adore Him.

Take time to unwrap the greatest gift of all.

I hope you have a very Merry Christmas!

Feel free to click on the blog title and then scroll to the bottom and click on the link to listen to Chris Tomlin’s song, “He Shall Reign Forevermore.” Worship the King of Kings today as we celebrate His birthday.