I am not a blog writer. However, when one of your best friends asks you to share your experience and the Lord asks you to tell His story, you do it.

Romans 8:28 “We know that all things work together for the good of those who love God, who are called according to his purpose.” has always been my life verse. It has given me hope through a lot of trials and hardships I have faced in my life time, this time was no exception.
My family and I just got back from a mission trip to Haiti: my husband, myself, our 16 year old daughter and 7 year old son. We were a part of a medical/VBS trip with Agape to the Nations. 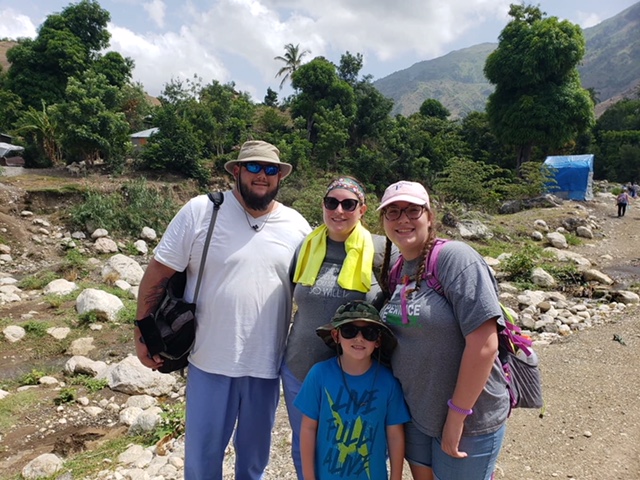 I did meet the Lord on this trip, just not in the way I imagined.

We had four clinic days while we were in country. We served the communities with medical, dental and vision services. I ran the vision clinic, with my husband assisting. We saw and fit glasses on more than 350 Haitians that week. I saw people who had never seen clearly, gain sight with a pair of glasses and the complete joy that came over their faces brought me to tears. I also saw people that were blind from cataracts, glaucoma and macular degeneration, and there was nothing I could do to help. It was a rollercoaster of emotions all week. I was thankful that the Lord had called me and equipped me to help, but was heartbroken for the ones I could do nothing for. People that were going to go blind from something that we can get taken care of so easily in the US. It didn’t seem fair. 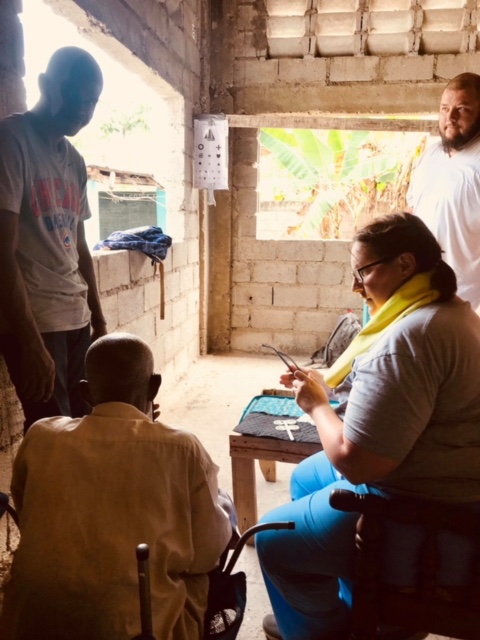 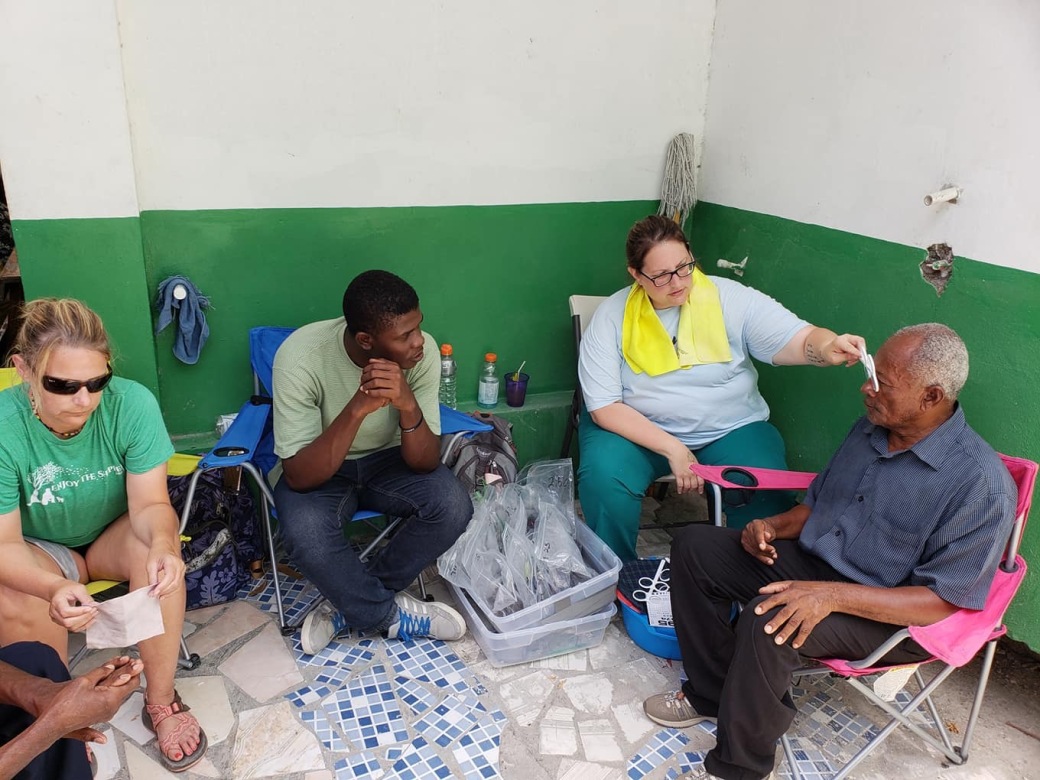 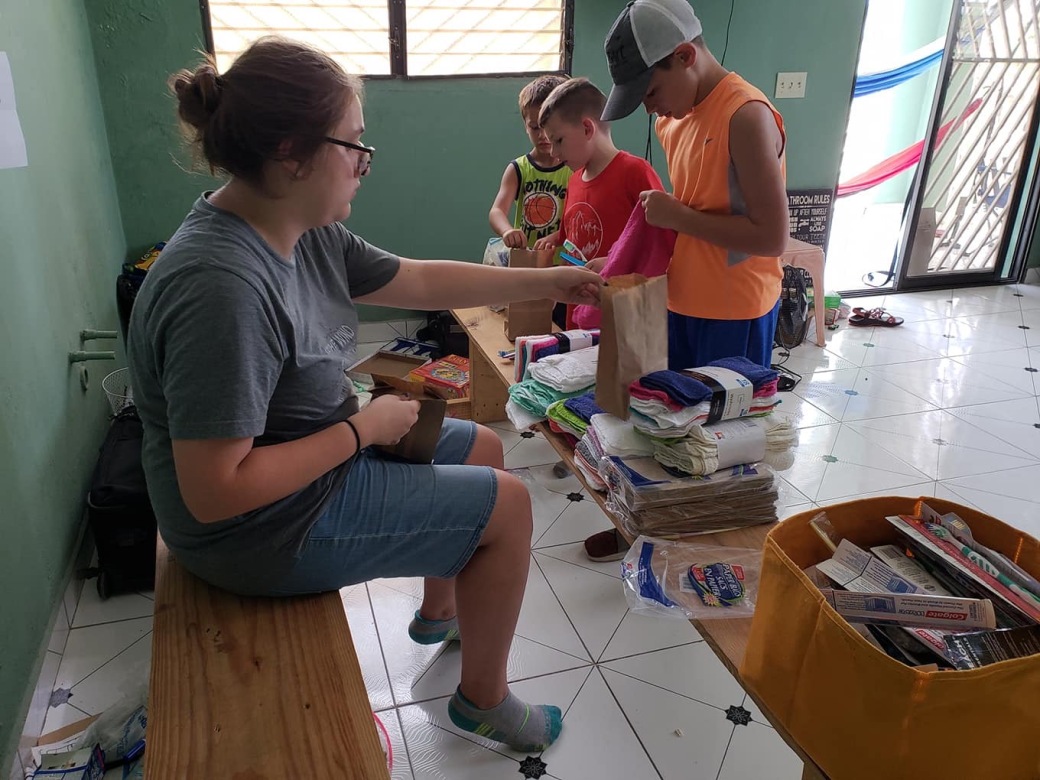 I saw the Lord working through the doctors, nurse practitioners, and nurses during clinic. I saw the Lord work through the VBS team when they were sharing God’s word to the families as they waited to be seen at clinic. I saw the Lord in the Agape teenagers and how He was pulling them closer to Himself and building them up to be a difference maker in their country for His Kingdom. I saw the Lord even grow my kids and pull them closer to Him on this trip. I saw my husband be so in tune with the Lord that he listened to the Lord’s prompting to share a word with the Agape teenagers about what it means to be a Godly man. 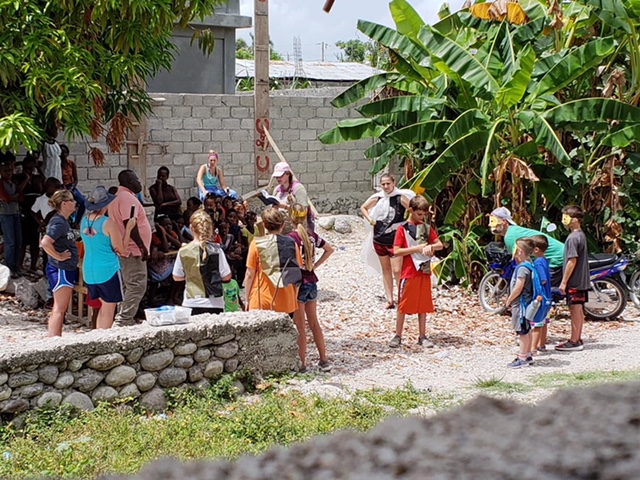 It was an amazing week, and I was definitely blessed to have been a part of it, but I still didn’t feel transformed. Each night we would have team devotion, and they would talk about how you should be changed from this experience… I just didn’t really feel changed.

That was until we started traveling home.

The Lord would do such an amazing work in my heart, that I will never be the same.
I am going to give you the cliff notes (and if you’re as old as me, you’ll understand my reference) of what happened next. I don’t want to dwell on the horrible, scary parts and get to how God came in on a white horse and saved the day and grew all of our faith.
We were having our last team devotion on Thursday night, when we were informed that instead of leaving at 6am, we would be leaving at 2am. That there were riots and unrest starting in Port-au-Prince and we wanted to get ahead of it to avoid any issues. On a little over an hour of sleep, we set out for the airport early Friday morning. We arrived at the airport 12 hours ahead of schedule. We got checked in and then went to go get something to eat to kill some time. While we were gone, we got contacted by the US embassy letting us know that roads were starting to be blocked and the riots had really amped up. Thankfully, we safely made it back to the airport to wait on our flights. 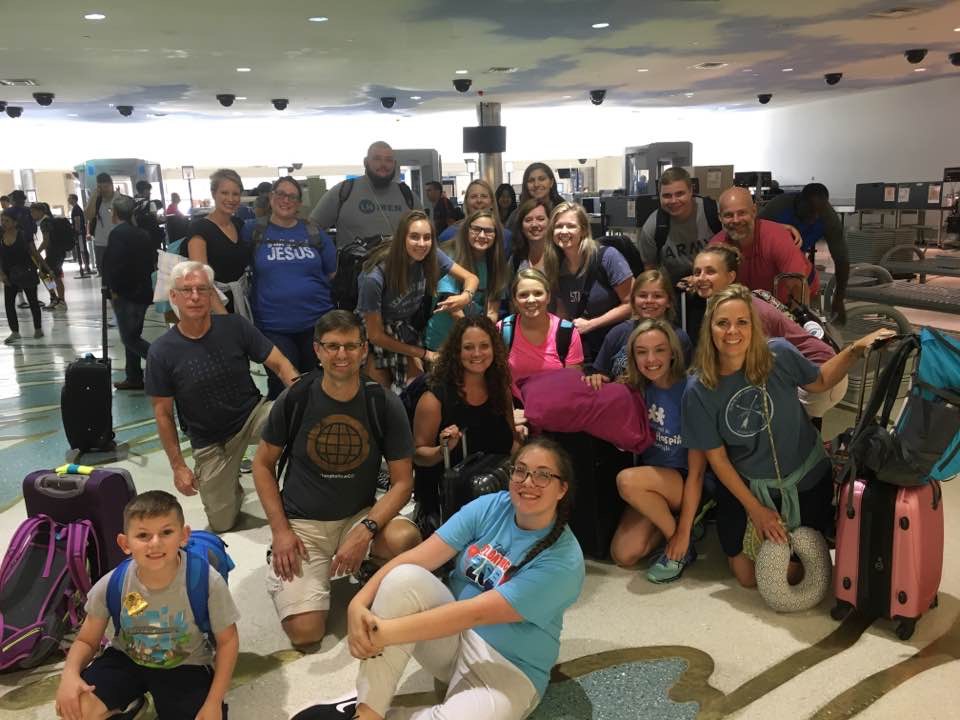 Opportunities arose for a few of our team to get on earlier flights, which they took. The rest of us were there with our families and didn’t really have the money to get us all on different flights, so we decided to wait it out.

We never thought that deciding to wait it out would mean to wait over 30 hours to then be taken out by rescue planes.

As time went on in the airport, our flight kept getting delayed, and delayed until we found out flights were being rerouted to the Dominican Republic because it was no longer safe to land in Haiti. No planes coming in meant no planes going out. We were going to be spending the night in the airport.

Our mighty God had been working through this whole thing, but He wasn’t finished yet.

The airline was going to get us hotel rooms, but then found out all the rooms were full and we would have to stay in the airport. Which was a blessing, because later on we found out if we had gone, we probably wouldn’t have been able to make it back to the airport. This whole night was full of sleepless worry, a lot of prayer, and God’s provision.

We did not have access to food or water while we were trapped in the airport, but when we were really desperate, God would send just enough clean, safe water, and one of us would find Fiber One bars or crackers in our bags to share. While we were worried and not sleeping, the Lord was hard at work, gathering many people from all over the world to come together, to pool resources, pray and find a way to get us home. 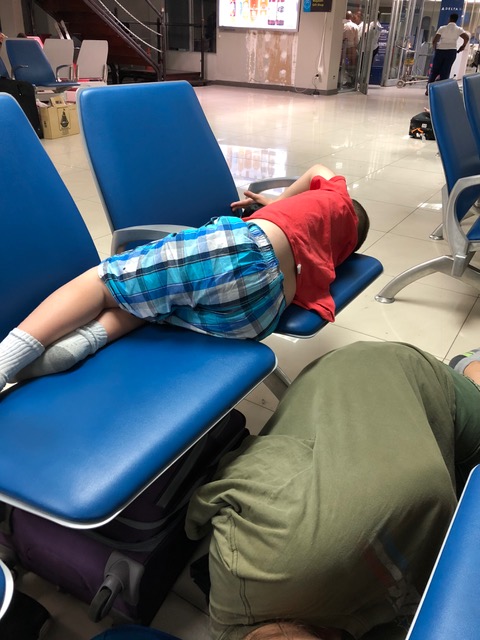 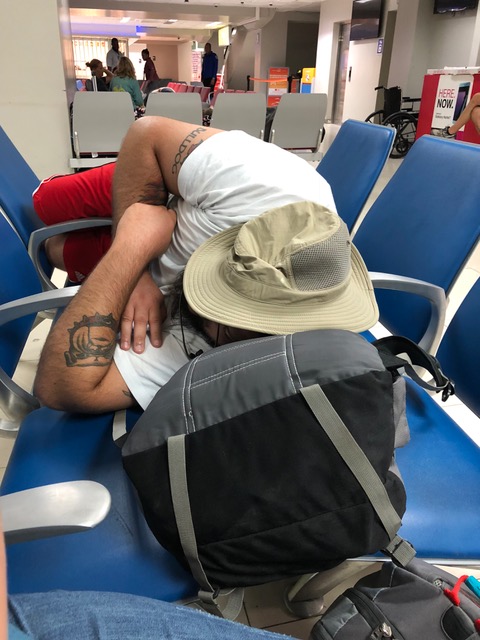 That next morning we were kicked out of the terminal to go through the whole process again, to only find out that flight after flight were being cancelled again. We spent hours gathered together, sitting on the dirty floor, still without much food or water, trying to remain positive, encouraging one another. 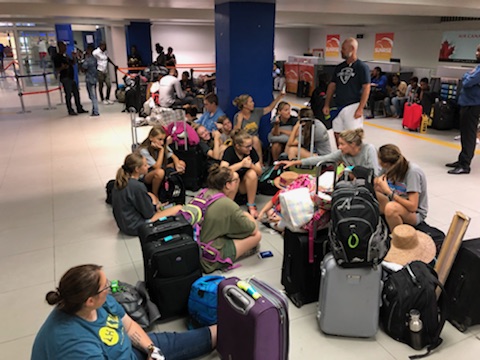 When one of us would momentarily lose hope, there would be another to pray over them, to encourage and to hug. Just when things were looking very bleak, Carlos (our Jet Blue, Haitian angel) came to us and said that Jet Blue was going to send an empty, rescue plane to come pick us up. A moment later, we got word that a couple of charter jets were on their way to us.

After 30 hours in that airport, after almost losing all hope, after having to completely let go and let GOD, He was coming to save us. He used ALL things for the good of those who love Him and are called according to His purpose.

By this time we were back in the terminal and could look out the window and saw that we were literally in the fire, just like Shadrach, Meshach and Abednego were in the Bible story the VBS team taught that week. 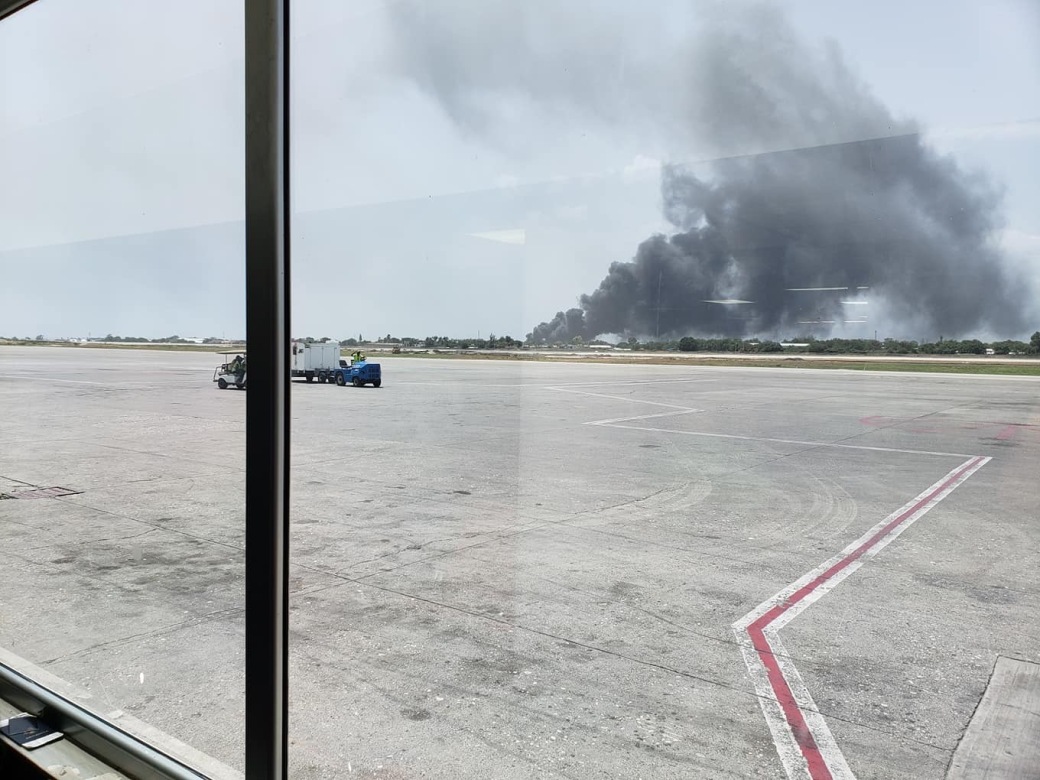 Just like that trio, we weren’t alone in the fire.

There were curtains of black smoke all around the runway from the fires started with the riots. I was worried that the planes weren’t going to be able to land, but then here come 1, 2, then 3 planes through that big curtain of smoke. I could not hold my emotion. I had that feeling of being a little girl and falling and scraping my knee. While I was crying on the ground, bleeding, here comes my daddy picking me up and carrying me to safety.
We safely got out of Haiti. 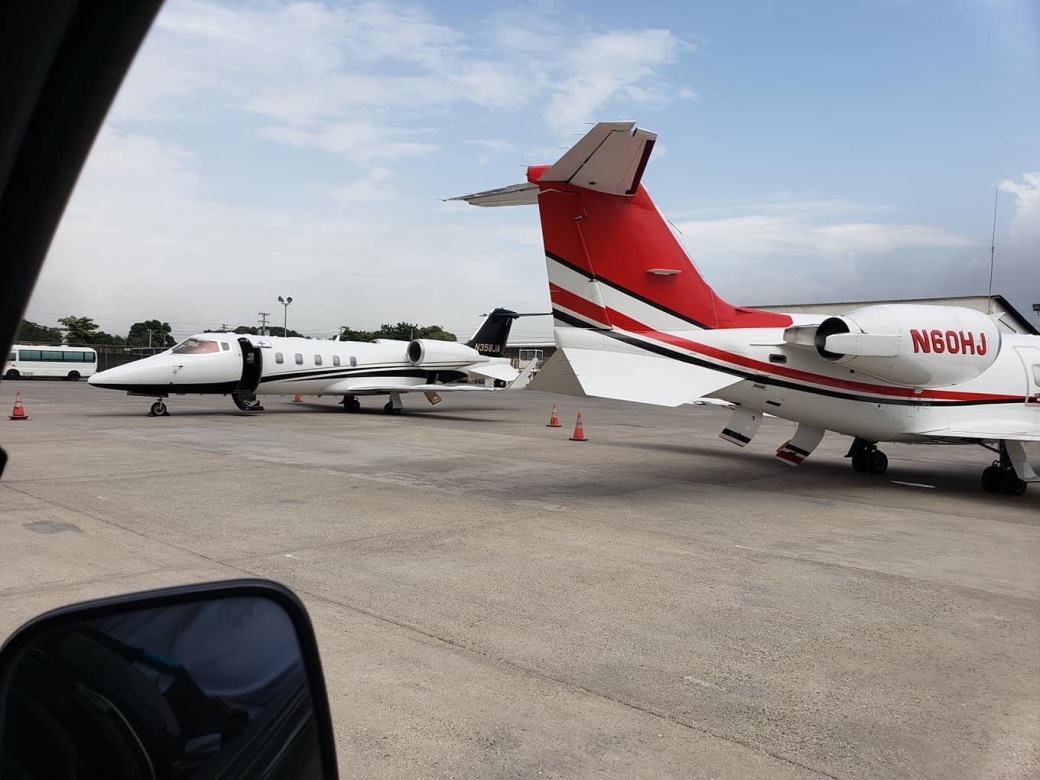 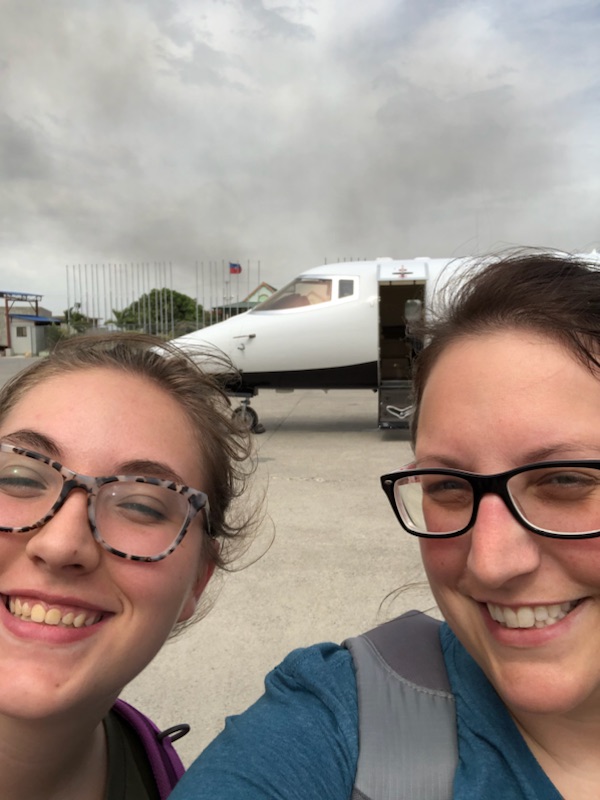 God was in that airport. I encountered the Lord as much face-to-face as is possible.

Before this whole thing, I would have said that I was strong in my faith, but when the going got tough, I doubted. God stretched my faith to the limit and grew it so much more.

Were there times I was afraid for my life? No. The Lord always kept us in the safest place possible in the whole situation.

Where there times I was scared? Absolutely. I would be lying if I said I wasn’t. I had my kids in a 3rd world country that was rioting and we were in the middle of the riots.

Do I regret going to Haiti? Absolutely not.

Will I go back? Without a doubt.

I know, more than ever, that if God calls me somewhere, He will take care of me and walk with me each step of the way.
“God is our refuge and strength, a helper who is always found in times of trouble. Therefore we will not be afraid, though the earth trembles and the mountains topple into the depths of the seas, though its water roars and foams and the mountains quake with its turmoil. There is a river- it streams delight in the city of God, the holy dwelling place of the Most High. God is within her; she will not be toppled. God will help her with the morning dawns. Nations rage, kingdoms topple; the earth melts when he lifts his voice. The Lord of Armies is with us; the God of Jacob is our stronghold.” Psalm 46:1-7
In those 30 hours in the Port-au-Prince airport God taught me how little we actually need, and provided everything we needed. He taught me not to rely on my own ways, on my own abilities, my own plans. That His plan is PERFECT- along with His timing.

There was a reason we were stuck in that airport, I think it was to give God a place to show how absolutely mighty He is. He performed miracle after miracle and I am blessed to have been a witness to His majesty!

If you take anything from this, from my encounter with God, I pray you remember to put your faith in HIM.

We serve a BIG GOD, and if you put your faith in Him, you won’t be disappointed. His promises are real, His word is true, and His love is unconditional.

I saw the Lord in that airport. I saw Him in the team members He sent to pray with me when I really needed it. I saw Him in my son’s face, who was never upset or cranky or complainey the whole time we were stuck (that’s a miracle in itself!) I saw Him in Carlos and his efforts. I saw Him out the window almost with His hands around those planes letting them safely to land. I saw Him when we landed in the US, and from then to us touching down in Nashville. He provided us plane tickets home, a hotel room for the night, dinner, breakfast and transportation to and from the airport and it didn’t cost us a penny.

Most of all I see HIM more in ME than ever before. 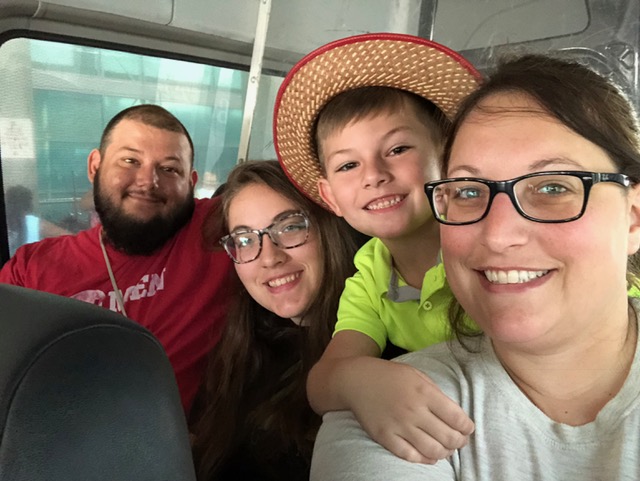 2 thoughts on “I Saw the Lord”