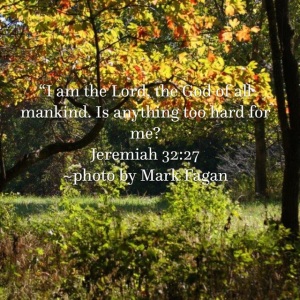 When I pray for people on my prayer list, I pray and I ask the Lord for healing, comfort, and peace. But I don’t always pray with an expectation that God will actually answer my prayers.

I question. I doubt. I waver.

Then when He actually answers my prayers, it takes me back. I’m stunned.

My faith is very small.

I was praying with my three-year-old daughter the other night. She was telling me that a monster might come get her while I was putting her down for bed. So I told her to pray whenever she feels afraid and ask God to watch over her and protect her from any monsters. She looked up at me and said, “Mommy, I can’t see God. Where is He?”

I understand exactly where she’s coming from. I have the same question sometimes. When it feels like the world is caving in all around me. I too wonder, “I can’t see You, God. Where are You?”

Sometimes, like Callie, I just want affirmation that He is real.

My friend’s daddy was going in for a major surgery last Thursday morning. He was told just weeks ago that the infection was bad and the antibiotics weren’t working. For a man in his late 70’s, the idea of a major surgery was scary. The recovery was going to be a long drawn out process.

For the last few weeks, he has been getting everything ready. He would be spending the next eight weeks of his life at a nursing home recovering and in intense therapy.

There was no surprise that he was very anxious and nervous.

His daughter, my friend, called in many people to pray for him.

And pray, we did.

The morning of the surgery, the nurses got him prepped and ready. He was about to be wheeled back into the operating room when the surgeon came in to mark the area he would be operating on. As he examined the surgery sight, he looked puzzled.

The surgeon said there was no need for the surgery. He didn’t see any infection. He said he had done several of these surgeries, and there was clearly no need to perform surgery in this particular case. Whatever infection was there before, was now completely gone.

Surgery was not necessary! Wow!!!

Right in the midst of a mundane ordinary day, an unexpected “God moment” had occurred.

The realness of God!

Still, I was totally shocked. Why does it stun me when God answers prayer? Why am I so surprised?

My coworker pulled me aside after hearing this wonderful news and said, “Rachel, I pray for people all the time, but I don’t always pray with the expectation that God will actually heal. I don’t pray with boldness and faith.”

And neither do I.

As our verse says today, “I am the LORD, the God of all mankind. Is anything too hard for me? Jeremiah 32:27

When we hear the so-called “facts” that the world is shouting at us, we are shell-shocked. It stops us in our tracks. We sense defeat. We feel hopelessness creep in.

That is why we must continually–daily–go back to the truth of God’s Word.

“Then you will know the truth, and the truth will set you free.” John 8:32

The truth continually sets us free. We need His truth to wash over us daily because we so quickly believe the lies all around us. We so quickly buy into the headlines that are bombarding us day in and day out.

I love the story in John 11 when Lazarus got sick and died. I can see the headlines now, “Lazarus Has Died!” Those were the facts. Jesus was in another town when He received the news.

It doesn’t get more final or hopeless than death.

But when Jesus shows up on the scene, the dead come back to life. He walked out of that tomb with a living, breathing, healthy Lazarus. The “facts” said that Lazarus was dead, but the “Truth” brought him back to life.

The older I get, the more I long for heaven. We live in such a broken world. There is so much devastation all around us. But oh if we could remember Who our God is and what He is capable of. If only we could depend on Him and trust Him with all of our hearts. And oh if we could pray with power, expectation, and boldness that nothing is too hard for our great and powerful God!

So next time we read the headlines and hear the so-called “facts,” may we boldly pray, claim, and cling to the “TRUTH” of God’s promises.

The Truth brings life and healing power. The Truth will set us free!

As the song goes that I used to sing in children’s church when I was growing up, “Our God is so big, so strong, and so mighty, there’s nothing our God cannot do.”