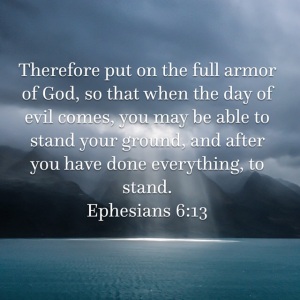 Callie fell coming off the step in our kitchen a while back and split her chin open. She had to get stitches and the doctor said she would have a scar.

Later that night, I was thinking about the whole ordeal. Could I have prevented Callie from falling? What if I had been closer? Maybe I could have caught her.

As parents, it’s hard to see our children go through hard things. We do everything we can to help our kids avoid battles.

Then the Lord gave me this thought.

That’s a hard word for me. I don’t like battles. I hate them. In fact, I do everything I can to avoid them. I run from them at all cost.

And I think that as parents we naturally want to protect our children from harmful things. I believe there’s a lot of wisdom in that. We are called to protect and guard our children. Certainly. But like anything else, there has to be a balance. We can’t fight all of our kids’ battles for them. We can’t prevent them from ever facing conflict and difficult circumstances.

Christine Caine said that Jesus came to make us dangerous to the kingdom of darkness.

The Bible clearly tells us that we are at war. Ephesians 6:12-13 says, “For our struggle is not against flesh and blood, but against the rulers, against authorities, against the powers of this dark world and against the spiritual forces of evil in the heavenly realms. Therefore put on the full armor of God, so that when the day of evil comes, you may be able to stand your ground, and after you have done everything, to stand.”

We are at war. The sooner we realize that, the better off we will be.

We don’t overcome the enemy by avoiding battles. We overcome him by fighting them.

Sure, we will get wounded at times. Wars are messy and bloody. We will surely have some scars along the way. I have many. But scars can be good reminders–and good teachers.

As much as we might try, we can’t run from the battle any way. We live in a continual battle. The way I see it, we have two options:

Option 1: We lay in the fetal position and get shot at.

Option 2: We swing our swords and get shot at.

Either way, if we are Christians, there’s a target on our backs.

I heard one pastor share that many Christians seem shocked when they realize they are under attack. Why is that the case? God tells us clearly in His word to put on the armor of God. Why would He tell us to put on the armor if we weren’t going to be in a battle? It’s not like we are putting on an armor to go shopping.

The Lord has given us the battle plan for victory. It’s called God’s Word.

Are we equipping ourselves by reading it on a daily basis? Are we hiding it deep within our hearts? Are we using His Truth as a sword and shield against the enemy when he shoots his lying arrows at us?

He has given us everything we need to win the war, including Himself. If we are Christians, we are warriors, and we are already on the winning side.

Leif Enger said, “We and the world, my children, will always be at war. Retreat is impossible. Arm yourselves.”

Are we raising warriors?

The following is a prayer of Ephesians 6:10-18 that Pastor Rick Warren shared on his Daily Hope podcast. It is a great prayer to pray as you start your day. This is probably the elementary teacher in me, but you can even make up hand signals for each part of the armor as you pray through it.

“Father, thank you for a fresh opportunity to engage in the battle for Your kingdom’s sake.  Before I take another step, please clothe me in Your whole armor.  Help me to stand firm, with the belt of truth (integrity to know and do the truth) buckled around my waist.  And the breastplate of righteousness (purity of clean motives) in place.  And my feet fitted with the readiness that comes from the gospel of peace (shoes of good news that by living and speaking Your truth, I can know Your peace).  I take up the shield of faith (certainty of trusting in Your promises), with which I can extinguish ALL the flaming arrows of the evil one.  I take the helmet of salvation and place in on my head (protect my mind from foolish thoughts or choices), and I want to wield the sword of the Spirit wisely (by putting Your word in my mind and heart every day). Thank you for wanting me to be victorious in this invisible battle, for giving me this mighty armor of protection in the war for souls.  Help me to remember to put on each piece every day for the rest of my life.” Ephesians 6:10-18